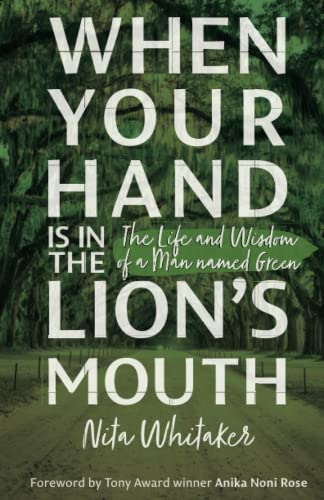 For the past thirty years, music fans throughout America and the world have marveled at Nita Whitaker’s strong, sultry and captivating vocals.

She’s gone from being a Miss Louisiana runner-up to singing on the hit movies The Bodyguard and the Ten Commandments, to recording several show tune and gospel albums, to collaborating extensively with multiple Grammy-winning producer David Foster, and performing with legends including Andrea Bocelli and Celine Dion. In 2021, the recipient of the 2019 NAACP Best Supporting Actress award made her Broadway debut as Wiletta Meyers in Alice Childress’ Trouble in Mind.

You can add “new author” to Nita’s list of accolades. Her acclaimed memoir, When Your Hand Is in the Lion’s Mouth: the Life and Wisdom of a Man Named Green, has released on Amazon.com and through all bookstores. Her second memoir, it focuses on her Louisiana roots and upbringing by a church song leader and musician whose voice informed her own. She writes the memoir in episodic passages, giving readers a 360-degree view of how a young rural girl found her voice and starred on stages throughout the world. Her fresh, inviting stories and warm father-daughter story remind us all of what is possible, and the subtle as well as direct impact parents make in our lives.

Robert Yehling and Erin James of Write Away Books edited When Your Hand Is In the Lion’s Mouth, which is enjoying brisk sales and a 5-star rating on Amazon and Goodreads — one of more than 100 4- and 5-star rated books members of the WAB team have edited to date. Order it here.